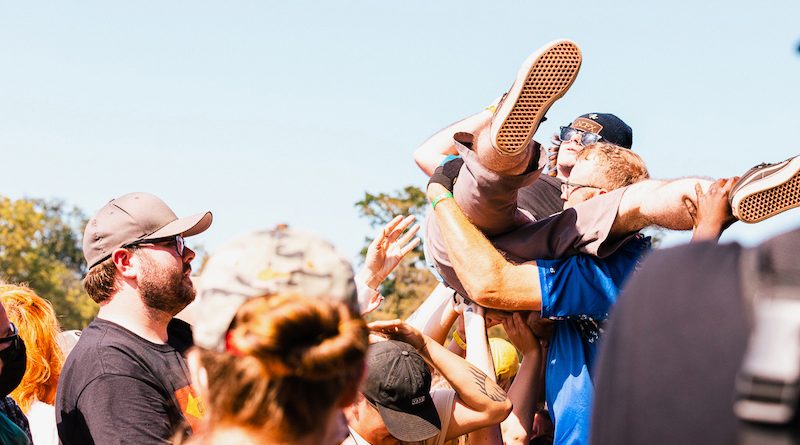 The first full day of Riot Fest ’21 started big and emotional with the likes of Envy On the Coast at the Riot Stage, along with bringing Oxymorrons to the Rise Stage and Señor Kino to the farther Rebel Stage. For this year, the alternating Riot and Roots Stages were no longer next to each other, but rather facing each other over the wide general crowd area. The Radicals Stage was still out perpendicular to the two, close the food stalls corner. However, the Rise Stage now was almost right next to the Roots Stage, albeit facing the other direction. This didn’t look good on paper for Rise & Riot, but the opposite directions, plus long alcohol bar extending the break in the crowd between the two, actually kept the sounds rather separate, with a kind of neat moment going around the bar where the music you heard changed rather abruptly. The smaller Radicals Stage was located among the carnival rides and foods, which did bring people to it for its smaller acts, but often not that interested.

It was usually kind of essential to have a big sound at Riot Fest, even more than most festivals. That’s what it was notable that Meg Myers on the Riot Stage, who seemed like an outlier when the schedule was announced, actually fit in, even going straight-up hard rock at times. It was less surprising with Sweden’s The Sounds, who were playing the Roots Stage rather early in the day for them, but still had tons of energy. Frontwoman Maja Ivarsson effused about missing audiences and playing shows, still totally engaging & compelling. The Sounds were followed on the Roots Stage by the big, emotional hard rock of Circa Survive.

One of many people’s favorite discoveries at previous Riot Fests, Radkey, played the festival for a third time at the Rise Stage. The Afropunk continued on the Radical Stage, first with Fishbone performing the thirtieth anniversary of The Reality of My Surroundings in full, which included their two classic singles, “Everyday Sunshine” and closer “Sunless Saturday” (it was very sunny at Riot Fest). Then came Living Colour, who were truly in color and brought their own brand of funksmanship. Before “Time’s Up”, singer Corey Glover asked, “How about a mosh pit, once, for old time’s sake…” – and got one. And leading into their final song, pro wrestler – and famously banned from Riot Fest – CM Punk introduced it, their big hit “Cult of Personality”.

There was one act who played it less in-your-face on Friday, New Jersey’s own Pinegrove on the Riot Stage. Reminiscent of Band of Horses in their alt-country/rock twang without being too twangy, they had more skilled emotion – and bonus points to frontman Evan Stephens Hall for his special thanks to the Active Sign Language interpreter (and bonus-bonus points to Riot Fest for having them this year). Meanwhile, Eyedress brought smoother synthy sounds, though still with some punk elements, to the Rebel Stage.

Riot Fest is always littered with veteran acts in the punk vein, maybe you know them well, maybe you don’t. Motion City Soundtrack’s reunion (they broke up after Riot ‘16) brought their own big emotionalist rock back to the Riot Stage, and one could appreciate their enthusiasm and happiness at playing again (plus delightfully awkward tribute to playing the same stage as headliner The Smashing Pumpkins). Meanwhile on the opposing Roots Stage before them was Thrice, while after Motion City on Roots was the professional Coheed and Cambria doing what they do best, even amid a rainfall that saw people go for cover, but lifted soon enough.

And then there are the veterans from another era: the twentieth century. Sublime With Rome is technically just the bassist Eric Wilson and drummer Bud Gaugh, after singer/guitarist Bradley Nowell’s premature 1996 death, but a decade ago the recruited Rome Ramirez to revive the band. That included new songs, but the crowd at the Radical Stage were there for the old songs (to be fair, there are multiple Sublime tribute bands out there with careers, so no wonder Gaugh & Wilson would want to reclaim their material). Meanwhile, O.G. punks Circle Jerks were just punk as fuck on the Rise Stage in their own latest reunion, including Keith Morris and many, many crowd-surfers.

The big Riot Fest ’21 headliner (who never canceled) was The Smashing Pumpkins, because this was a hometown gig. Yes, they throw back to the nineties (the set included “Drown” from their soundtrack to 1991’s so-nineties-it-was-set-in-Seattle Singles), and have had their own break-ups & reunions, but currently three-quarters of the original line-up is back, frontman Billy Corgan with guitarist James Iha & drummer Jimmy Chamberlin. Their first show since August of ‘19, that meant some first-time-ever-live performances off of last year’s CYR (QRO review), including “Ramona”, “Wyttch” and “The Colour of Love” – plus playing “Quiet” (from 1993’s seminal Siamese Dream) for the first time since 1994!

Indeed, the set largely eschewed the years that The Pumpkins were just a Corgan operation, but that meant so many great from back when, like “Today”, “Bullet with Butterfly Wings”, and “Tonight, Tonight” with its reference to, “City by the lake,” which got tons of cheers. For “Eye” (off of the Lost Highway soundtrack), Meg Myers joined them, and later local guitarist Michael Angelo Batio came on for “United States”. Corgan joked about how, in his younger days, he would play an obscure song and piss people off, but now would play the classics. He was also wearing an odd outfit that looked a little like a muumuu, but as he said, “I’ve always been an arty fuck.”

It was a bit unfortunate that a very different local, Lupe Fiasco, played at the same time on the Radical Stage, but pulled his own crowd. And then there was NOFX on the Rise Stage, frontman Fat Mike joking about everything (like how, if he lost weight, he could join earlier-in-the-day-on-that-stage Anti-Flag).