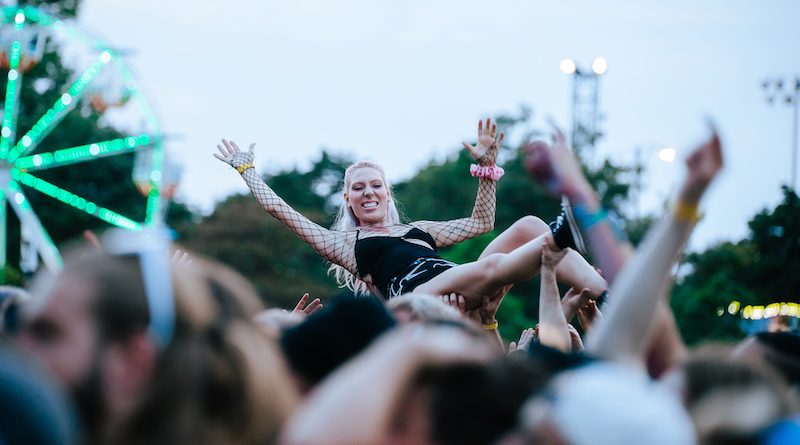 Though the skies were overcast, no rain fell on Day Two of Riot Fest. Instead, after an epic early set by The Joy Formidable on the Roots Stage, there was a special Ukraine Tribute on the stage, orchestrated by Gogol Bordello frontman Eugene Hütz (QRO interview at Riot Fest ’22). The war in Europe has been going on long enough, and just far enough away, to forget about it all, or just give nominal regards (like still having a Ukrainian flag in your social media bio), but Riot Fest has gone the extra kilometer. Music stopped on all stage for the tribute, which included a local troupe of traditional Ukrainian dancers (the festival drawing on Chicago’s long & deep well of Ukrainian immigration), and promoting aid organization United24.

While Riot Fest has long been a festival of older acts, there was a nice mix of younger artists as well on Saturday. For instance, while O.G. punks FEAR did their hardcore classic The Record for its 40th anniversary on the Riot Stage, The Get Up Kids played the 25th anniversary of their own pop-punk touchstone Four Minute Mile on the Radicals Stage (made in Chicago) – and the more youthful pop-punk jxdn even had some thrash energy on the Roots Stage. Post-hardcore came to the Rise Stage with Movements, while vets 7 Seconds played eighties classics & new songs (and even cover “99 Red Balloons”) on the Riot Stage.

One rising young act that’s been playing all sorts of festivals this year has been YUNGBLUD, the kind of artist who could play Atlanta’s Gen Z-skewing Music Midtown last year (QRO photos) – the festival that should have happened this same weekend but was cancelled because they weren’t legally allowed to ban guns at the fest, in case you think politics never effects fans – to an older-skewing Riot. Aughts emo fans probably feel about him the way nineties alt-punks felt about aughts emo fans, derision fueled by seeing that you’re not the young generation anymore. But he had a particularly charming presence on stage, undoubtedly boosted by (surprisingly) being British – “yungblud” sounds much better in a British accent.

It’s interesting watching young punks grow up. While Alexisonfire wasn’t that memorable on the Radicals Stage, The Front Bottoms there aged well from their youth-fueled start. Too often that snarky teen energy dissipates or becomes tired, but these no-longer-kids are doing well in their second decade.

In their like fifth decade or so are the original erudite punks, Bad Religion. They’ve got a deep well of songs going back to the eighties and even seventies, so they did play a number that you didn’t know, but then they’d pull out something like “No Control” or “I Wanna Conquer the World”. “21st Century Digital Boy” pretty much predicted this millennium – oxycontin hadn’t been unleashed on America yet, but the line, “Mommy’s on valium” gets pretty damn close. And singer Greg Gaffin not only called out the always-awesome Active Sign Language interpreters (worth the price of admission at any festival, but particularly to watch when signing someone as verbose as punks like Gaffin – or some of the dirtier, funnier punks Riot Fest also pulls in), but he also got her on the big screen.

After The Story So Far played their third Riot Fest on the Rise Stage, it was time for an absolutely amazing set by Gogol Bordello. They’ve played Riot many times themselves (QRO ’21 photos), but this year, despite being a late add, they were probably the standout of the whole fest. Yes, it was fueled by the catastrophic war in lead singer Eugene Hütz’s native Ukraine (where the band had just played with the military defenders), but they brought it out very well. Highlight of highlights was when Hütz announced, “Let’s make it a real Ukrainian party!”: the return of the local traditional Ukrainian dancers, who kicked (literal) ass, totally having fun, and were well integrated into the gypsy punks. Classic “My Companjera” was dedicated to, “All those people whose lives have been fucked up by the war in Ukraine”, but they also got to bring out some from released-the-day-before new record SOLIDARITINE (QRO review).

Six years ago, “The Original Misfits” reunited – Glenn Danzig, Jerry Only, and Doyle with second guitarist Acey Slade and former Slayer drummer Dave Lombardo – and reunited Riot Fest ’16 (QRO recap). So, perhaps this latest reunion wasn’t quite as special as that one, or fellow Jersey goth-punks (of a decidedly different generation) My Chemical Romance the day before, but it was still a giant show, from playing Walk Among Us in full for its 40th anniversary to the giant Halloween decorations on stage. Playing Walk in total meant the band played some songs for the first time in this reunion, adding a nice bonus to this appearance. Yes, Danzig vocals didn’t come out the best at times, and he can be kind of a jerk (from disappearing “cancel culture” to not allowing any photographers shoot their impressive stage set), but overall, it was just the massive experience you wanted from The Misfits.