The Hives do it, bigger & better, like at the ‘New York stop’ on their “World’s First World Wide Web World Tour”.... 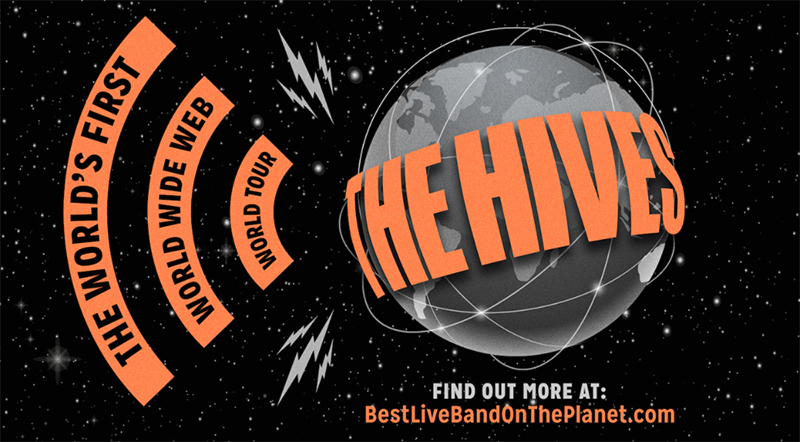 Click here for all of QRO’s coverage of The Hives in QRO’s ‘Spotlight On : The Hives’ feature

It’s been a just over a year since COVID-19 made its unwelcome appearance, and almost a year since everything shut down – including live concerts. By this point, music fans should be familiar with everything that musicians are going through, from financial difficulties to fan withdrawal, and everything that they’ve been trying to do to get through this, such as livestreams. Indeed, you’ve probably watched a few, you should’ve watched a few, like the intimate solo acoustic appearances that proliferated early on, to the bigger full concerts with slicker production values. But you still haven’t seen how The Hives do it, bigger & better, like at the ‘New York stop’ on their “World’s First World Wide Web World Tour” on Saturday, January 23rd.

Instead of doing one big concert for the world, or even two or three for different time zones (like Laura Marling – QRO livestream review – and Gorillaz – QRO livestream review), Sweden’s rockers are doing six-count-‘em-six livestream performances, each arranged for a city, from Berlin to London to New York to Sydney to São Paulo to back home in Stockholm. Of course, they’re all livestreams from “an undisclosed bunker in Sweden,” but are done at a time for the designated city, such as 7:00 PM Eastern Standard Time for NYC – which was 3:00 AM Stockholm time. Yet it’s not like there weren’t fans from the “really greater New York area,” as singer Howlin’ Pelle Almqvist called it, like Syracuse, Miami, San Diego, Mexico, London, and Colombia.

Those fans were encountered on the livestream chat – and live calls. Most livestreams these days have chats, to enable fans isolated in their homes to gab & cheer with each other (and don’t have to shout over the band, always tough at a loud live Hives show). But The Hives have gone further, with Pelle taking actual calls live (over WhatsApp) during the show on an old school big landline receiver phone (that was plugged into a smartphone), as well as even checking out their own chat on a screen (Pelle requested & got screams in the chat). Admittedly, the callers were mostly just so happy that they were tongue-tied, with the connection sometimes not great, and English sometimes not their first language (but same for The Hives). Plus, of their requests, one was one that Pelle brought up (a.k.a. the next song on their set list), another asked for the most obvious hit “Tick Tick Boom”, and the ‘deep cut’ request of “A.K.A. I-D-I-O-T” wasn’t filled (they had done it the last night), but it was just a really cheery & special way for The Hives to connect to their fans when they can’t be there in person.

The Hives shows are known for their rocking wildness, and even alone in a bunker, they didn’t skimp (couldn’t dive into the crowd, though). Dressed up and decked out in black-and-white as always, this time tuxes with white tops & black bottoms, they played with a white backdrop and neon sign saying “The Hives” in cursive behind them. There were their ‘ninja’ crew members, one dressed in all-white, the other all-black, almost out of a karate movie. Oh, and the band brought their own piped-in crowd sounds, like a 2020 MLB game or an old Monty Python skit, but these sounds seemed to be made specifically for the show, timed with the set or perhaps ‘played’ live (can one ‘play’ crowd sounds, like manipulating a live laugh track?), with even individual shouts of “I love you Pelle!” or cheers when he started unbuttoning his shirt. What might seem like a lame idea on paper really worked in reality, not only saving the show from the awkward silence that has marred so many COVID livestreams, but making the viewers feel like they’re part of a sweaty crowd (a Hives show would definitely be a super-spreader event…).

The set list stretched from the hits to obscure, very new to old favorites. Some of that was because, in the run-up to each show, The Hives run a vote for two songs, both of which are delivered unseen in an envelope like an awards show. The winner was the unreleased “Stick Up”, because New Yorkers (or would-be-New Yorkers) love their rarities. The runner-up was “Patrolling Days”, noted as being written in 2010 (off of Lex Hives – QRO review) “about the end of the Trump Presidency” – “You can call me Crystal Ball MacNostradamus” – with lyrics, “I fought the big cheese out of office / And showed the hep kids how to dance”.

It has been many years since Lex Hives, the band’s last new record, something noted in the crowd, and in QRO’s interview with the band pre-tour (QRO interview) they said that they have tons of new material, and are trying to narrow it all down to two or three records. Three new pieces were done this night, big rockers “Paint a Picture” (“Let me paint a picture / I ain’t got no fuckin’ job” totally fitting today), the darker (including only red lighting) hard-hitter “I’m Alive”, and the electric “Good Samaritan”. Hopefully we’ll get a new Hives record or three to go with our vaccines in 2021.

Of course, The Hives also played their released material, including the hits. The evening started with the killer Lex opener “Come On!”, begging/demanding the virtual crowd to get into it from the get-go. 2004’s Tyrannosaurus Hives came in with “Walk Idiot Walk”, and 2000’s Veni Vidi Vicious in “Main Offender” – and, of course, their breakthrough, “Hate To Say I Told You So”. That extended rocker (which included drummer Chris Dangerous standing on his kit to point to bassist The Johan and Only during his solo) was specially dedicated to New York City, Pelle remembering the first time they played the Big Apple, in the aftermath of 9/11. Earlier in the evening, Pelle namechecked NYC venues, Terminal 5 (QRO venue review – QRO live review of The Hives at T5), Irving Plaza (QRO venue review – QRO photos of The Hives at Irving Plaza), even massive Madison Square Garden (QRO venue review) & tiny Mercury Lounge (QRO venue review), and Electric Ballroom (which even Pelle seemed to think was the wrong name, possibly made up). And the whole show ended with their perhaps biggest song to-date, “Tick Tick Boom”, a wonderfully extended rock outburst that included introductions for all the band, including, “if you like guitar, you’ll love” guitarists Vigilante Carlstroem and Nicholaus Arson (as your correspondent said in the chat, “The only time you’re allowed to shout ‘ARSON!’ in a crowded theater…”).

Unlike big livestream concerts, there was only one cameraperson – a very hard-working cameraperson. He or she ran around the stage as much as any Hive, but with a video camera on the shoulder presumably heavier than any guitar, and has to be pointed, focused, and zoomed properly. The cameraperson might not have had to wear a tux or ninja pajamas (though your correspondent kind of hoped that the end of the show would reveal them in costume), but was basically directing the whole thing live & on the fly while running around. Yes, the video was kind of jerky, but so’s a Hives live show, one’s head jerking around to try to keep up with everything going on. And the camera had to make sure they weren’t hit by Pelle’s high-kicks…

The Hives still have three more livestream shows next weekend (see below), and with Sydney, São Paolo, and Stockholm, there’s likely one in your time zone. If you love The Hives, definitely see them on this run, even see them again. If you don’t know The Hives but love live music, have been missing it, take a shot of the World’s First World Wide Web World Tour.