It seems fair to say that tUnE-yArDs' Merrill Garbus had no idea what would await her when she recorded those first few songs on her humble Dictaphone back in... 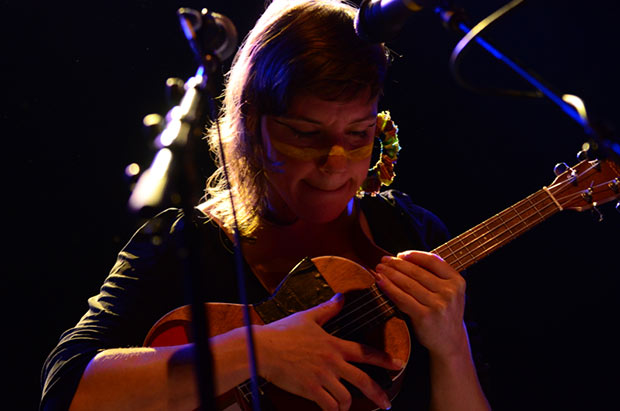 Click here for photos of tUnE-yArDs at 2012 Sasquatch! Festival in George, WA

Click here for photos of tUnE-yArDs at 2011 Primavera Sound Festival in Barcelona, Spain

Click here for photos of tUnE-yArDs at Music Hall of Williamsburg in Brooklyn, NY, on May 21st, 2011

Click here for photos of tUnE-yArDs at Brighton Music Hall in Boston, MA on May 16th, 2011

Click here for photos of tUnE-yArDs at Lincoln Hall in Chicago, IL on May 10th, 2011

It seems fair to say that tUnE-yArDs’ Merrill Garbus had no idea what would await her when she recorded those first few songs on her humble Dictaphone back in the early noughties.  “I’ve never played a room this size before,” Garbus breathlessly repeated, wide-eyed in between songs at Shepherds Bush Empire in London on February 15th.  Anyone could forgive such an artist nerves or jitters when headlining the biggest show of their career.  But if she or her long time live collaborator Nate Brenner were nervous, it was cleverly disguised.  If anything, the atmosphere on stage was positively childlike, an explosion of joy, frivolity and celebration; a world apart from the pensive, solitary introspection that defined her early shows.

Back then she had only just been plucked from her relatively niche hub of Marriage Records to be introduced to the fold of indie deities 4AD – a label with a track record so impeccable any new signings are automatically destined for cult status – and so was still operating under the weight of expectation and promise.  Fast forward a year, and Garbus found her confidence with the accomplished, polished, melodic air of w h o k i l l (QRO review), a work that, while unmistakably unique, sits comfortably among the giants of 4AD’s roster, most notably New York City natives TV On The Radio (QRO live review) with their off kilter jazz influenced pop.  It’s no wonder, then, that she has found herself gaining momentum and recognition in the U.K. alternative scene. 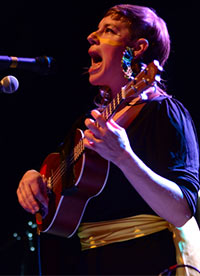 This sense of proud accomplishment shone through the entire performance at Shepherd’s Bush Empire.  Garbus attacked each song with ease, bouncing off the w h o k i l l backing band’s playful saxophonists and even dancing with them at points.  When it comes to tUnE-yArDs’ stand out elements: beat-lead melodies, tribal percussion, Kenyan-influenced vocal operatics used as another instrument with the help of loops, it’s almost difficult to imagine them in a live setting; but together tUnE-yArDs and the w h o k i l l band incorporated the mundane aspects of the recording into the show in a way that was entertaining and seamless, even giving them space to really play with their material.  On “Gangsta”, the most eagerly anticipated single from w h o k i l l, the audience were treated to a saxophone solo, Garbus conducting. 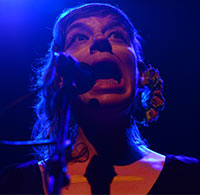 Occasionally the other members would retreat from the stage to give Garbus a chance to shine on her own on songs such as “Powa” and “Wooly Wolly Gong”.  It was here that the show took a more intimate turn, with Garbus lamenting in the voice that is almost iconic; at turns wild and ferocious, soulful and rich or sweetly divine.  Her ability to hold court of the largest venue she had played do far, armed with those same instruments used in her room all those years ago, is a testament to her talent and showmanship. 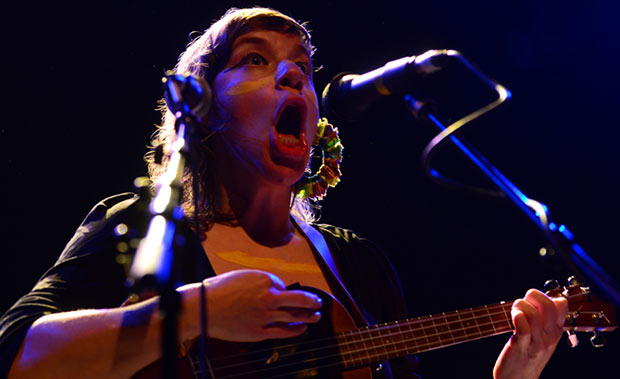 Nada Surf : The Stars Are Indifferent To Astronomy