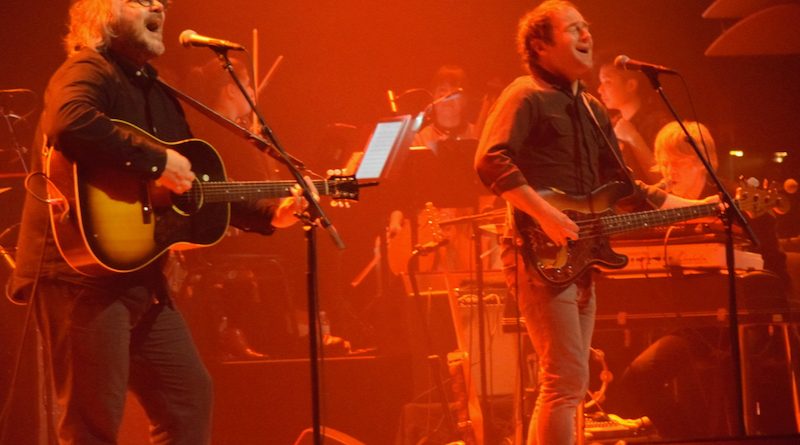 Click here for QRO’s review of Wilco at Chastain Park in Atlanta, GA on August 14th, 2021

Click here for QRO’s review of Wilco at Brooklyn Steel in Brooklyn, NY on October 13th, 2019

These days, Wilco are a well-oiled machine, a stable line-up with big tours & strong albums. They’re the definition of ‘alt-country’. They’re such a sad dad-rock staple that you probably have an uncle, brother-in-law, son-in-law, or at least one of your kid’s friends’ dads who looks like a member of the band. But, as with fellow twenty-first century dad-rock icons Pearl Jam, Wilco’s early days were fraught, nowhere more so than on 2001’s Yankee Hotel Foxtrot. As documented in what became the seminal rock doc I Am Trying To Break Your Heart, the recording sessions were marred by conflicts, including a switch in drummers. Then Reprise Records (a division of Warner Brothers) hated it & refused to release it, leading the band to sell it to Nonesuch Records (another division of WB). Oh, and it was released on September 18th – of 2001. And then it became a modern classic, a touchstone not just for the band & their fans, but of indie-rock.

The third night at uptown Manhattan’s classy United Palace Theatre (QRO venue review), it was a classy night. The whole thing started early, and instead of the usual rock opening act, it was The Aizuri Quartet, the string section Wilco recruited for this tour, who began the evening, before Wilco joined them. Yes, the crowd leaned decidedly older, but there were some young people there – very young, as clearly the kids of longtime fans there with their parents, but Wilco are the kind of band that a parent can introduce to their child, like those parents were once introduced to The Beatles by their parents. And while United Palace is a seated venue, most everyone was on their feet for most all of the show.

But how could you sit for “I Am Trying To Break Your Heart”? That ultra-classic started the album and started the night. You already have your favorites from Yankee, and the heart-breaking opener is one of them. There was the sublimely beautiful “Jesus, Etc.” (who lyrics were written before the Twin Towers fell, but will always signify that moment when “tall buildings shake”), and the salute to the “Ashes of American Flags”. “Heavy Metal Drummer” is so much fun you fell in love with “another and another,” because Wilco declares, “I’m the Man Who Loves You”. And even the songs that you might not have remembered as instantly glowed, like the upbeat “Pot Kettle Black” and its declaration that, “Every song is a comeback,” and Foxtrot closer “Reservations”, with cinematic silhouette lighting for its close/close of the album.

The echoing end of “Reservations” was closed by a fan timing his shout of, “Wilco!” to shift the crowd from hushed close to big cheer. Wilco, with their horn section and the Aizuri Quartet, left the stage – but you knew they would return, and so they did, for the second half of the evening. And it was a special second half, going from no stage banter during Yankee to great lines from frontman Jeff Tweedy. “We have some help, as you may have noticed,” introducing each member of the quartet, all their horn players, and then Wilco bandmembers themselves, multi-instrumentalists Mikael Jorgensen & Pat Sansone, guitarist Nels Cline, bassist John Stirratt (“my brother,” the only other charter member of Wilco), and (after pretend forgetting) drummer Glenn Kotche, noting that Kotche came in the middle of the making of Yankee, but at the start of filming I Am Trying To Break Your Heart, giving Kotche credit for transforming the record & the band.

“In the spirit of this record, we’re trying to do songs that were meaningful to us, and related to this record in somehow, or some way,” starting with a lovely cover of Bill Fay’s “Be Not So Fearful”. Then Tweedy tipped his hat to the ghost hanging over the Hotel, “There’s one more person we’d like to thank, and that’s Jay Bennett. We wrote a lot of these songs with him, and we’d like to play a few more of our favorites from working with Jay. This goes out to him, wherever he is…” The rift between Tweedy and the self-described “other guy in Wilco” Bennett was the dramatic heart of Break, with Bennett leaving the band after Yankee, and passing away in 2009. Whenever an act plays a seminal album that had a difficult creation, members leaving, one always wonders how much, if at all, they’ll namecheck those who left, but leave it to Wilco to do it both classy and heartfelt, before the classy and heartfelt “Pieholden Suite” from the preceding record Summerteeth.

If you’re going to do your most successful album, in full, you gotta bring out some era-appropriate rarities. There was the sweet “Cars Can’t Escape” and sunny “A Magazine Called Sunset”, both seen on 2014’s extensive rarities collection, Alpha Mike Foxtrot. And there was “Maybe the deepest cut of all time – should have been a hit…”, “The Good Part”. “This is one of the songs we sent to Warner Brothers Records, and they said, ‘It gets worse every time.’ Then we’d send them something new, and it’s worse…” One would have thought that a major label would have loved the seventies upswing of “Good Part”, but, as Tweedy noted after the song, right after he sings the chorus, “Let’s get to the good part,” the background vocals reply is, “Is this the good part?”

And there were a few more “late greats” to please the crowd, such as the sing-along “Hummingbird” (from 2004’s A Ghost Is Born, making it the ‘newest’ song on the night) – Tweedy noted that he just hummed the tune to the Aizuri Quartet during the break, “And they knew that.” And the evening ended with a pair from 1996’s Being There, the up-rock swing of “I Got You (At the End of the Century)” and an absolutely killer closing “Outtasite (Outta Mind)” – it was particularly great to see even the Aizuri Quartet rocking along and having fun, as their bows bounced.

There’s a reason that Wilco have matured from early should-have-been-a-hit alt-rock to days established adult indie-country mainstay. They’ve got great old albums, and great new albums – and neither forcibly overshadows the other. Yankee Hotel Foxtrot will always hold a special place in their hearts, and in their fans’ hearts, and Wilco knew how to deliver it & more.

Mondo Cozmo – This Is For the Barbarians