The Kills : Live & Outside

Live, The Kills manage to be both an incredibly intimate and incredibly distant band. ... 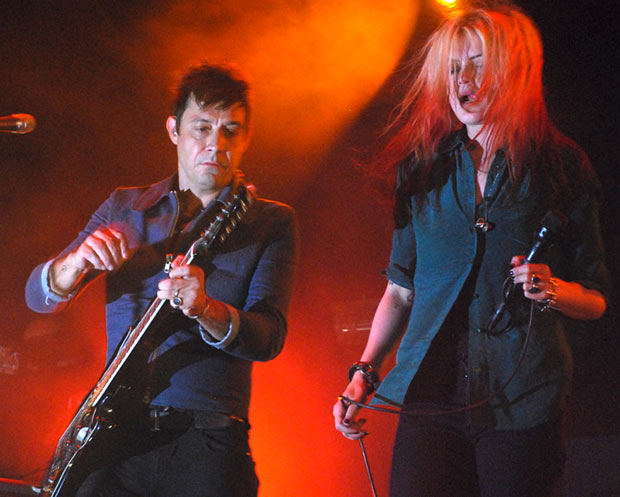 Sneaker brands seem to be all about music these days, as ‘kicks’ need a way to highlight themselves & the music industry needs sponsors.  Vans is doing the free ‘House of Vans’ (QRO venue review) this summer in Brooklyn, while Converse has been doing its own free ‘Converse Rubber Tracks’ shows this summer at various spots in the Big Apple.  At Music Hall of Williamsburg (QRO venue review), Converse had White Rabbits at the end of June (QRO photos), and Action Bronson coming up on August 23rd (QRO NYC Show Preview) – but the biggest shows have been outdoors on Pier 63, a.k.a. Chelsea Pier, next to the sports & entertainment complex at the far west end of 23rd Street, jutting out into the Hudson (and part of the same Hudson River Park as Pier 54 – QRO venue review – to the south and Pier 84 – QRO venue review – to the north).  July saw the still-riding-a-huge-wave-of-hype Sleigh Bells (QRO live review), while Saturday, August 18th brought The Kills to the pier. 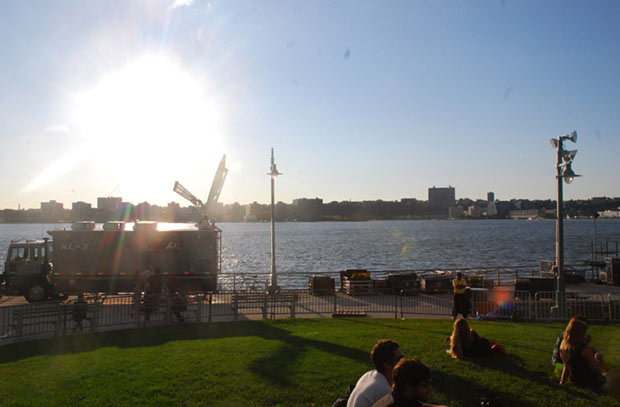 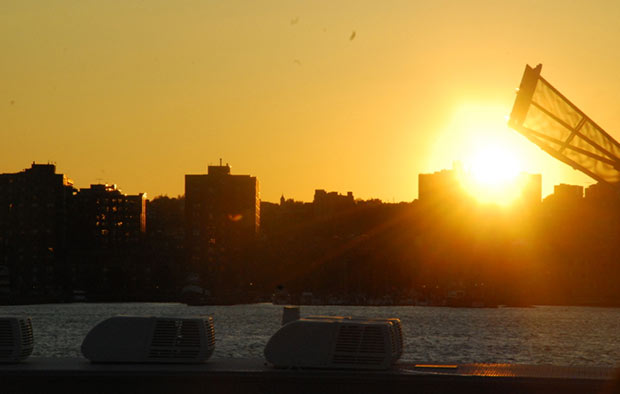 Thankfully, it was an absolutely gorgeous day, with the sun only setting after the openers (the event did start early, with Viva Viva at 6:00 PM, and main opener Black Bananas at 7:00 – QRO photos).  The event was free, but you had to get tickets online, and they were snapped up ultra-fast – understandably for a duo who’ve already sold out midtown’s big Terminal 5 (QRO venue review) multiple times in the past year.  And it was on actual grass – still a rarity for outdoor shows in the city – with slight hills to the left and right for more views of the stage.  Of course, one of those sides was taken up with the rather large and in-your-face VIP area, which stretched all the way from the entrance to just near the stage – there’s no NYC event that doesn’t have a VIP area to get

the people who think that they’re very important to come out (and assuage their fragile egos), then chat amongst themselves and only be interested in the free drinks (to be fair, security didn’t stop VIPers from bringing free drinks to their hoi-polloi friends in general admission…). 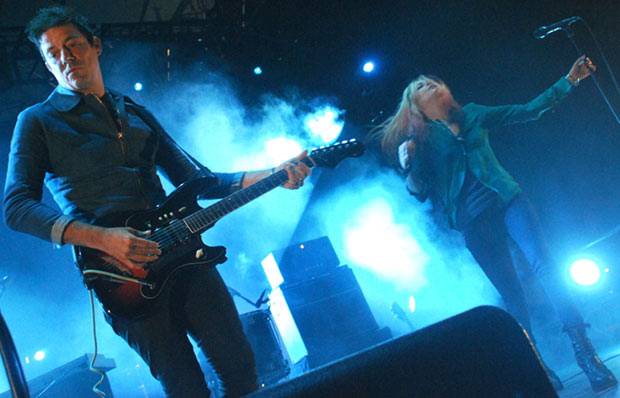 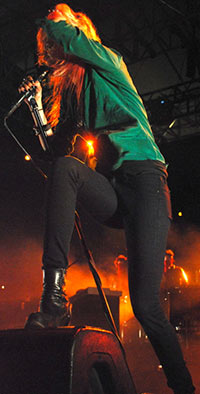 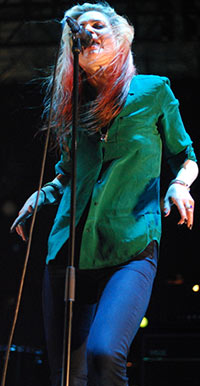 Live, The Kills manage to be both an intimate and distant band.  The garage-rock from Jamie Hince and Allison Mosshart has this incredible visceral quality that is only raised oh-so-much higher live, as Hince hits his licks like a razor while Mosshart jerks forward and back like she’s riding a stop-start bronco.  Even the drumbeat hits you hard, whether just done via drum machine as they usually do, or with backing tom-tomers like at Pier 63 (who would, whenever not hitting a beat, even for a moment, put their sticks up in an ‘X’).

Yet the actual people in the band can feel decidedly

out of one’s reach.  Mosshart’s hair spends most of the time in her face (all that jerking of her body also whips her mane), and she never stands still.  Hince is more rooted, thanks to his guitar, and doesn’t have Mosshart’s long locks, but seems an incredibly reserved personality, willing to let Mosshart play frontperson, while he shreds on the side (think Slash & Axel, without the bad blood).  The two say very little to each other or the crowd, and at Pier 63 were often behind a wall of smoke machine – even outdoors, where it would blow away & dissipate easily, it often felt too much (god only knows how bad it would be if they played a smoke-heavy venue like Webster Hall – QRO venue review).  Even the drummers in the back were hidden – both by being very far in the back (if you weren’t up front or in the pit, you might not have even known they were there), and because they were dressed in zipped up black leather jackets, with handkerchiefs tied over their faces, like a biker gang about to rob a bank. 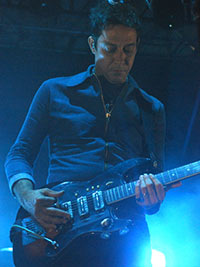 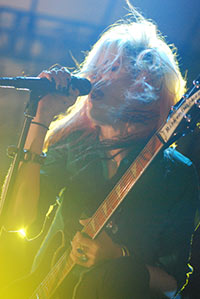 The live intimate/distant dichotomy does distinctly work for The Kills, however.  Mosshart is such an effective frontwoman that you almost don’t care that you seem to never see her lovely face behind all that hair (which was especially in her face on Pier 63, thanks to the wind blowing off the Hudson, plus it not getting clumped together with sweat as happens at their indoor shows – QRO photo).  This is the woman who could make even Jack White take a backseat live, when they teamed up as The Dead Weather 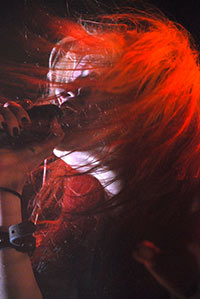 (QRO photos).  Eyes (and camera lens) were on Mosshart, 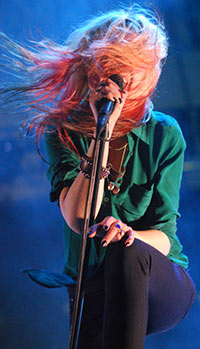 despite all her movement, almost like a She & Him show (QRO live review), with everyone watching a songstress like Mosshart or Zooey Deschanel, and not the accomplished guitar man behind the music like Hince or M. Ward.  It’s enough to make you almost feel sorry for Hince – but then you remember that he’s married to über-supermodel Kate Moss, and then it’s impossible to feel sorry for him… 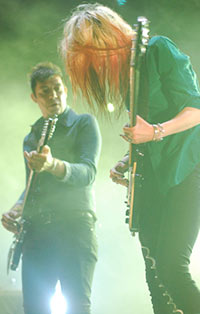 Unsurprisingly, the set was dominated by their latest release, last year’s great Blood Pressures (QRO review), which took up almost half of the set list (QRO photo).  What was surprising was how much The Kills played off of their first record, 2003’s Keep On the Mean Side – as much as 2008’s breakthrough Midnight Boom (in between record, No Wow, got only one song, “No Wow” – but it was the opening 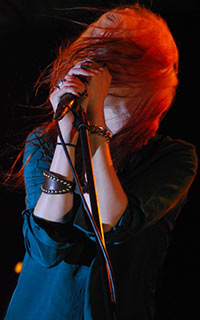 piece of the night).  Almost all of Mean Side came after the encore break, after doing killer Blood hits like “Future Starts Slow”, “Heart Is a Beating Drum”, “Satellite”, “Baby Says”, and “You Don’t Own the Road” and Midnight hits such as “U.R.A. Fever”, “Black Balloon”, and “Tape Song”.  Following the encore return of Blood‘s slow ballad “Last Goodbye” – always an outlier in their set – Hince said, “We’re gonna play some really old songs,” with which they closed out the night with Mean Side‘s “Pull A U”, “Fuck the People”, and “Monkey 23”. 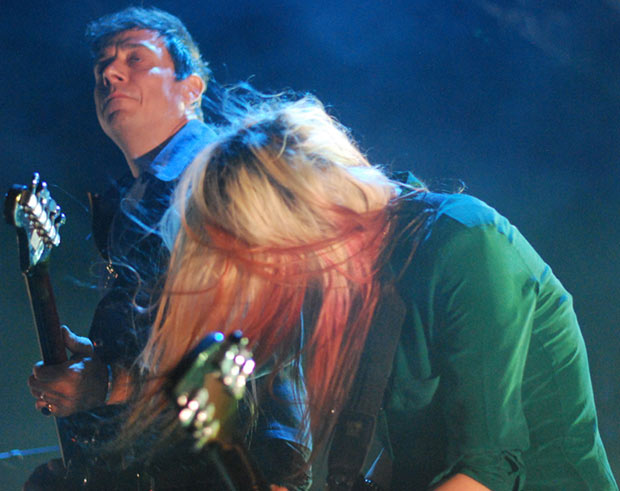 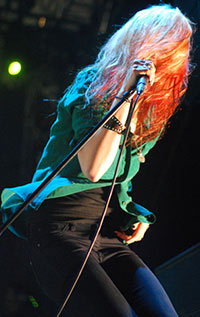 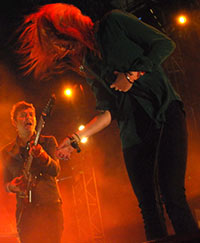 How much interest was generated in Converse Sneakers at the show is debatable, despite all of the advertising posted, but that’s always the case with a sponsored show (and The Kills did include a thanks to Converse in the few words that they said to the crowd).  But it was a killer night by a killer band.