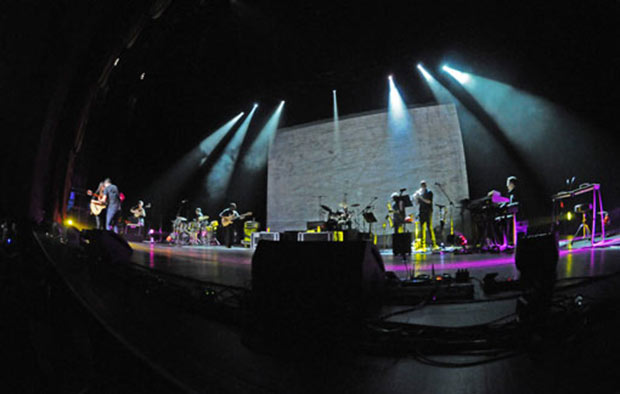 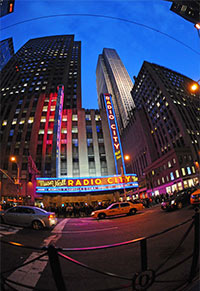 Radio City Music Hall is located on 1260 Sixth Avenue, Manhattan, on the corner of 50th Street and Sixth Avenue in Midtown.  Radio City Music Hall is physically part of Rockefeller Center (home of NBC programs like The Today Show, Saturday Night Live, and 30 Rock), but is part of Cablevision’s owned-and-operated circle of major Manhattan venues, including Madison Square Garden, WaMu Theater at MSG, and Beacon Theatre.  Events are held there both through Radio City Music Hall itself, as well as being booked by others like Live Nation and Bowery Presents.  After Madison Square Garden, it is probably the most famous venue in New York, and one of the most well known in the world.

A seated venue more in line with Town Hall six blocks to the south than Terminal 5 well to the west, Radio City Music Hall has a box office entrance before the main lobby, after which one passes through doors to a foyer, before going to the stage floor, or up stairs and through doors for either of the two balconies (when a show is finished, doors on the house-right side of the venue open onto 50th Street, to facilitate exiting).  The stage is four-to-five feet off the stage floor, average for smaller venues, but relatively close for such a large one as Radio City.  Unsurprisingly for such a major venue, the lighting and sound system is top notch, but the vast majority of seats are quite far away, along with marked angles from either side (and is a notoriously difficult place to shoot for professional photographers, who are often relegated to the way back, or denied a photo pass at all).  Radio City does sell drinks in its main lobby (along with popcorn), with mixed drinks coming with drink stirrers that contain a small blue neon light.

Radio City Music Hall is best known for its annual Christmas Spectacular with The Rockettes, and has held major awards shows like The Grammys and The Emmys, but still holds a scattering of concerts throughout the year.  The band that play Radio City are obviously big-name, but are more of the artistic and older bent than Madison Square Garden’s full-fledged stadium.  It has the positives and negatives of any seated venue: you can’t dance or worm your way to a great spot, but also don’t have an obstructed view and aren’t squeezed (ushers are watchful of those trying to move up into unoccupied seats closer to the stage).  A mixture of MSG’s stadium and the Broadway theaters located just a few blocks away, the legendary spot is still going strong. 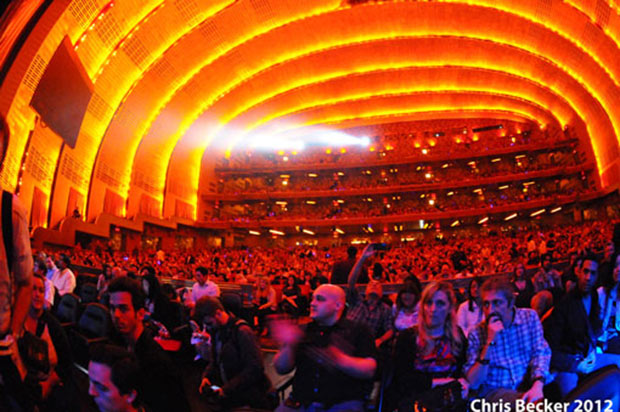 Great Northern : Remind Me Where the Light Is